We went from Thailand to Laos… It was a very long trip, two days in total. Seven hours of the trip were by boat on the Mekong River. I really enjoyed that trip and was fascinated by the beautiful scenery. I absolutely fell in love with that river

Have you heard about the Mekong River? The Mekong is the 12th biggest river in Asia. I can´t believe that it is only the 12th biggest because it is so incredible. At the border to Cambodia, the Mekong becomes about 14 km wide and it is said that there are about 4000 islands around there. This is why they even call the south “4000 islands”.

Our first stop in Laos was Luang Prabang. After that we went to Vang Vieng and then to Vientiane, the capital city.

In Luang Prabang there was not much to do but it was beautiful and the night market was exciting since we saw very different things than in Thailand. What I find very interesting is that Luang Prabang and also other cities in Laos are still quite “french” since Laos was a French colony. There are bistros, baguette and you get cheap wine everywhere. In Thailand wine is very expensive. I guess Laos still has connections to Europe so it is easier to import certain things. There were lots of European restaurants and the houses looked quite European too. 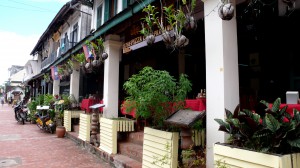 In Vang Vieng we did the famous “tubing” on the Mekong. People sit on a tube and float down the river. A few years ago there were hundreds of bars along the river where people were partying and drinking. Unfortunately many people got so drunk or were doing drugs that they were not able to control their tubes. Many people died over the years. A guy in Laos said that it was fun in the beginning but that they “created a monster” which got out of control. So now they have closed down most of the bars. Only three bars are left, which are definitely enough to get wasted. 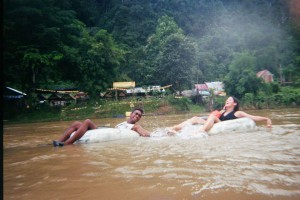 Vientiane is a really nice city, again with a beautiful night market and colonial houses. From there we went to the “Buddha Park” which we first thought was very old but it was built in 1958. In that park there are hundreds of different Buddha statues. It looks really nice but it´s a tourist attraction and you´re wrong when you think that you are looking at something really old. Still it is worth a visit. 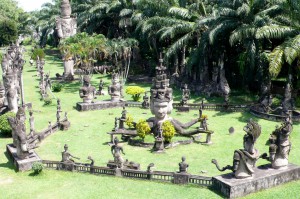 From Vientiane we went down south, to 4000 islands. We chose the island Don Det and stayed there for about 10 days. To be honest, this was one of the most beautiful places I´ve ever been to. I have been so relaxed and so happy that I can´t find words for it. We found a wonderful little bungalow, with view on the river for only 30.000 kip which is about 3 Euros. It was a lovely place. Only one night I totally freaked out when I woke up at 3 a.m. and saw a man hanging through our window, going through my backpack looking for valuables. I will certainly never forget that.
We spent much time at “happy bar” and met lots of wonderful people from around the world there. Manni, a lovely English guy who has stayed and worked there for many years, organized boat trips for us. With a few beers and loud music on the boat we enjoyed the sunset and good atmosphere. I guess I could have stayed there forever. 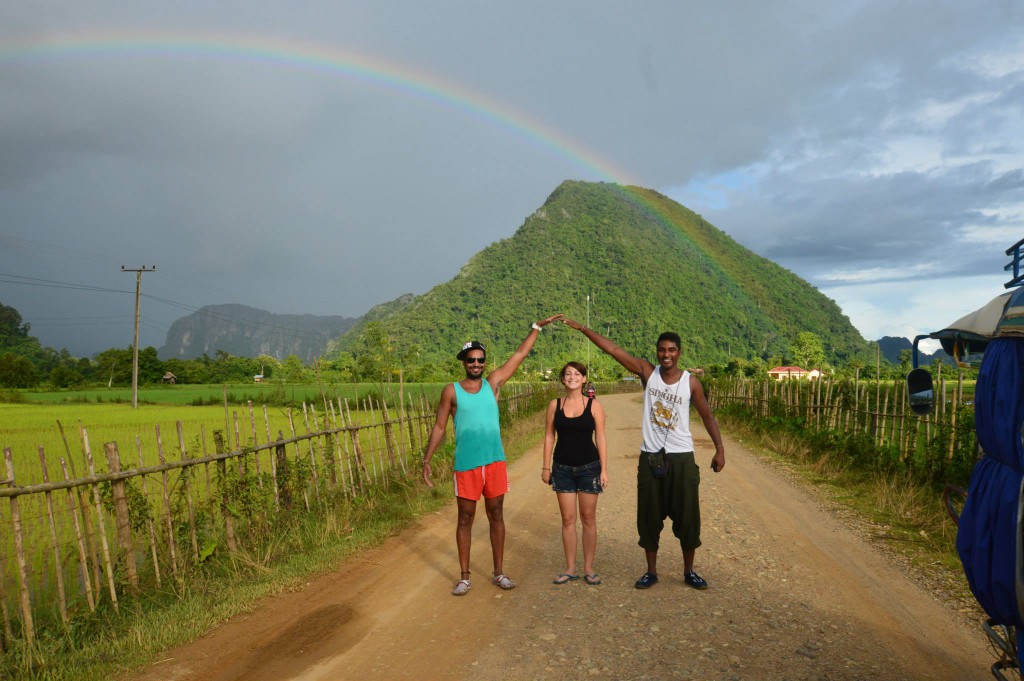