On the 13th of April Thailand celebrated the Songkran Festival. It is the Thai New Year and the biggest water fight of the world. People run around with water guns and buckets full of water, everyone is just busy making other people wet. You shouldn’t carry any important stuff unless it´s in a waterproof bag. Stephen, lovely french girls and many other people I recently met and I went to Thong Sala to celebrate there. Usually it is a big market place where you can buy all kinds of food. But on this day, it was one big party. There was loud music, many many people, everyone was throwing with water or baby powder and dancing like crazy. We enjoyed ourselves a lot until a really stupid thing happened. Two guys, we don’t know if they´re Thais or maybe people from Burma, started fighting in the middle of the crowd. (crazy thai boxing) Apparently one guy was stronger than the other one. So the “weaker” one smashed a beer bottle on the head of the other one. I felt that something was wrong but it was too late already. Suddenly I just saw the broken beer bottle flying in my direction. I tried to get away but I only had about half a second to do so. Everything happened so fast… I got that broken bottle directly on my head and face. I had a very deep cut on my head and many little ones over the right side of my face. I was just standing there, losing a lot of blood when people took me aside. I was so confused and didn’t know what´s going on. Fortunately there was a nurse who explained to me that it´s bad but not too bad and that I have to go to hospital quickly to get stitches. The situation was really crazy because the party went on, there was loud music, lots of people talked to me in many different languages and I didn’t understand anything. Then Stephen said he is going to take me to hospital on his scooter – if I was ok going. I didn’t really know but I knew that’s the quickest way. So we made our way through the partying crowd, people looking at me with open mouths. The ride was crazy because Songkran went on and people kept on throwing loads of water on us while we were driving on the scooter. We didn’t really know the way to the hospital. Stephen kept on talking to me random stuff because he couldn’t look back to see if I was ok or maybe fainting. We then saw a police car and asked them for the way to the hospital when they decided to escort us, which added even more drama to the whole story (haha).

Also at the hospital everything happened really fast. I got stitches on my face, head and ear. Stephen was sitting next to me the whole time, holding my hand. I was really scared and in bad pain. The nurse kept on saying “long breathing Madame” which made me crazy but helped a little at the same time. One scar on my cheek was caused by the nurses. They just cleaned my face with rough paper towels and cut me with the tiny bits of glass which were still on my face… aaaaah! Couldn’t they just use water to rinse the wounds first?
Anyway… when I was done, I realized that all of my friends came to the hospital. We were around ten people, all of them were so sweet, trying to help me. I was so confused, I just wandered around looking for something or asking questions. Stephen did all the bureaucratic stuff for me, which also wasn’t easy because everything was so hectic. Then he took me back to the Surf House. I’ll stop here now with that story. My friends here were amazing and took really good care of me.

The next days, Stephen was always there to help me out, brought me food or take me back to the hospital for check ups. I don’t know what I would have done without him. At this point: thanks again Stephen!!!

After the accident I wasn’t able to do much. First of all I felt like hiding all the time because I looked so terrible. Then also I couldn’t go to the sun because of the fresh wounds. Also my chewing muscle was cut, so I couldn’t really open my mouth or chew. (it took weeks until I was able to open my mouth again)
After they have removed the stitches I felt better. I got a veeery big sun hat to keep my face in the shadow. It looked a bit boring so I started to “pimp” my hat. I added feathers, flowers, shells and other stuff to it so that it looks nicer and it’s more fun to wear it. I have a good cream for the scars and wear very high sunscreen. Now my skin looks a bit better and people are not asking what happened all the time. They actually think that I got attacked by a cat.

Before the accident I w 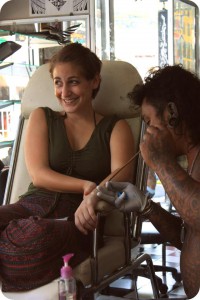 as thinking about getting a tattoo but didn’t do it because I hadn’t found the right studio to do it. I had an idea of what to get but it made even more sense after that incident. I got my tattoo the day I got the stitches removed and I am really happy about it. It’s a traditional bamboo tattoo (getting the stitches removed was more painful than the tattoo)… it’s something written in thai but I won’t tell what it means. If you’re interested you can ask me ; ) But it has something to do with this phrase:

Learn from the past,

the present is you,

the future is the light. 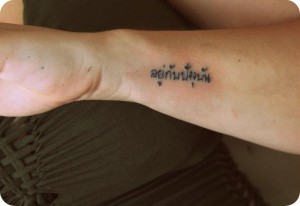 Yesterday Stephen and I had to go separate ways. Stephen went to Laos to meet the french girls and I stayed on Koh Phangan. In three days I’ll continue my journey to Koh Lanta. I found a very nice place there and think that it will be good to relax and maybe finally calm down. The past month was fun, full of surprises but also quite difficult. I didn’t find the time to really relax.

When traveling with the french girls, we realized that when you travel on your own you’re almost never alone. You always meet new people. Especially in Thailand this is a very easy thing to do. Right now I’m sitting in front of the Surf House with another French girl I met, Marie. We’ve seen each other at a party a few days back and the next day we found out we are staying at the same place. It’s always nice to meet new people and have good conversations about life and traveling.

I just went to the sea, the first time after my accident. It felt so great! The water is hot – I think usually in winter I take a bath with the same temperature. The view is amazing, there are only a few clouds on the sky and I can see Koh Samui, the neighbour island lying very clear in front of me. The water is very clean and you can find lots of wonderful shells and stones. I am starting to feel good and free again!

So as you see, and for sure know,… everything can change within a second. You never know what´s going to happen next. So leave the bad things behind, don’t worry about the future and just live in the moment, being thankful for what you have.

(this post was imported from my former travel blog)